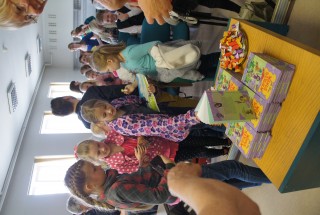 The literature Festival Prima Vista offered some poetry for children 10th May at Tartu Public Library. Poetry riders of the last year’s tour, Jukka Itkonen and Leelo Tungal presented the new book Mõnus sajuilm. The book includes selected poems from the Finnish poet Jukka Itkonen, which are translated into Estonian by Leelo Tungal.

Jukka Itkonen is talented poet, who has written poems and lyrics for his own music and for others. Leelo Tungal, who interviewed him, asked if it is so, that already two music albums with his own lyrics have been published.

“Actually, there’re hundreds of albums with my texts”, Itkonen corrected, “I just haven’t published all myself. I have written more texts for others, who are many times better singers than I am.”

Jukka Itkonen’s poems for children are rich of rhyme, play on words and funny situations. They also have many feelings like loneliness, friendship, fear and happiness. It was interesting to follow the expressions on the children’s faces, when Jukka Itkonen and Leelo Tungal presented the poems. The most affected reactions they got with the poem Õuduste maja (“Horror House”). There was a horrible surprise in the end of the poem, placed to the cellar of the horror house: the horse, whose rider is the teacher of maths!

“I didn’t like maths in the school”, Jukka Itkonen explained.

“Yeah, we can find that on your poem”, Leelo Tungal commented. 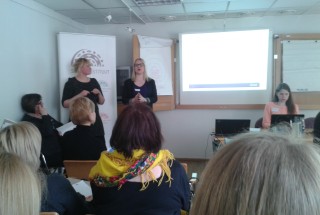 We had a seriously great seminar in Tallinn! It has taken some time to have absorbed even a slight portion of all what went on there. Festival organizers from three different countries (and beyond!) can generate some quite interesting ideas and positive energy. Everybody was so into it all that we have almost no pictures. In the bad phone shot you can however see Annika Aru from Viljandi Folk and Heddy Ring from their sponsor, the Estonian telecommunications company EMT talking about sponsoring. That was some interesting info there, and it was nice to see how the close relationship between a sponsor and sponsoree works.  It was quite obvious that it is a two-way relationship, where both parties give some and get some. Other speakers included Annika Mylläri from Kokkola Opera, Astrida Rogule from Cesis festival, Lena Pasternak from Baltic Centre for Writers and Translators in Visby and Poetry Ride's own Jenni Kallionsivu (from whom you are getting this blog post). Anki Hellberg-Sagfors from Produforum guided us in an interesting group work session using the advisory ring method, which is a method many of us will be using later. Many thanks to all who attended, you all made the event what it was.
We also got our new notebooks, and the lucky reader to get her own is Murmeli. She has already received hers and is hopefully filling it with something fascinating.
Soon after the seminar it was time for the yearly Latvian litarature awards. Heli Laaksonen's (poetry rider 2006) collection Kad gos smei, translated by  Guntars Godiņš, was chosen as the best translated book! Ingmara Balode (poetry rider 2010) got the prize for the best poetry collection. That is something to raise a toast for !