It's never too late to translate 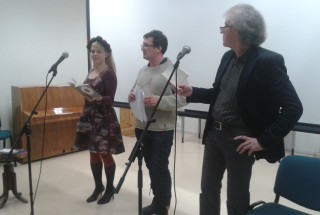 "Translating is not only putting texts into another language in the hope of having them printed as books", said Finnish poet Heli Laaksonen in Poetry Ride's poetry in dialect- themed event in Tartu main library. "When you really get to know somebody else's thoughts, it inspires you to do things you might not otherwise have done." Laaksonen performed in the event together with Contra and Jan Rahman from Estonia and Guntars Godiņš from Latvia, all of whom have a close and warm relationship with dialects.

Heli Laaksonen spoke about her her meeting and translating the Estonian poet Jan Rahman had changed her views on writing and inspired her to write in her own language, the south-western Finnish dialect. The public was lucky to witness the translation process live on stage as Rahman translated a poem from Laaksonen's new book Aapine. Which, by the way, is a nominee for Finlandia junior, the most prestigious award in children's literature in Finland. Seeing and hearing a translation being born was a thought-provoking experience, as translating is usually done in writer's chamber, away from the public eye. Now we could not only witness it, but some members of the public were participating in the process as well. As the event was part of a seminar of Southern Estonian literature organised by the University of Tartu, there were a lot of experts of dialects present.

Laaksonen's collection in Latvian, Kad gos smei, has become a phenomenon. It is not so very common for a book of poetry – translated poetry especially – to have already 3 prints sold out. Laaksonen was one of the very first poetry riders in 2006, and Guntars Godiņš got to know her works during the festival. Poems written in the language of the Finnish coastside found their new home in... Read more 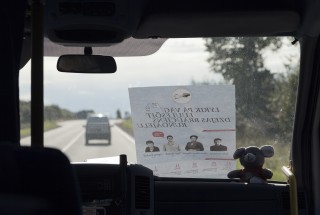 “Has this year's Poetry Ride been done in utmost secrecy”, is a question you are probably asking yourself when the night is falling and you are watching the darkness, feeling lonely and forgotten. “Why haven't they told me about it? Then I would have gotten up from the bed, brushed my teeth (optional) and gone to listen some poetry in amazing languages”.

Fear not, we haven't been touring around without telling you. We would never do that. Instead we have been planning the Poetry Ride's future, and it's a lot to think about. The Poetry Ride is already 8 years old. It seems to be the time to cut the apron strings. The Poetry Ride was born as a beloved child of the Finnish Institute in Estonia. It has been nurtured and raised so well that it has become too big for one institute to handle. It is time to look for another way of being, maybe even have our own home. By our own home I don't mean any kind of physical place, but an own organisation. It would give the poetry riders the freedom to pursue the goals of the festival – promoting the translation of poetry – in different ways. And when kids move out, something else usually fills the space. By letting go of the Poetry Ride the Institute gets more room for new ideas. Maybe after a few years we can consult another festival or other activity born in a cultural institute and searching its own way. Even better would of course be if we could find somebody to consult us now, so let me know if you know of such experiences.

Preparing the move has taken quite a lot of time, and therefore we have decided not... Read more