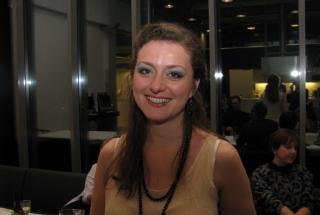 – English is a so-called “Killer Language”; it is one of these big languages that kill other languages. Often, English is the only possible door to get in contact with others, socialize, share experiences – unless you learn one of the other languages. My best advice is therefore: Learn more languages while your head is young and fresh!

The other poets are Miia Toivio from Finland, Kārlis Vērdiņš from Latvia and Jan Kaus from Estonia. One by one they present themselves and read selected poems. Gunnar then reads the Norwegian translation he has made of each poem. It´s fascinating to listen to; first this flow of words you cannot grasp, then the images fold out and let us get glimpses into another life in another place with a different everyday life than our own, other red days in the calendar, other food memories, other ways of thinking of the same things we are thinking of.

How to Translate from a Language One Doesn´t Know?

During the translation of these Poetry Ride poems, Gunnar has cooperated with a Latvian-Swedish poet Juris Kronbergs, who first translated the poems into Swedish. Then Gunnar used these as a map for the Norwegian translations.

– I´ve found quite a lot of mistakes in my first translations, so I need to do a “total make over”. You sense it immediately when you read them out loud. Try reading them to your mum or someone else in your family; they will know immediately whether what you read works well or not. These translations need more testing. If we can make them work, there will come a book.

Gunnar writes his own texts in nynorsk (New-Norwegian). He has also translated Miia’s poems into nynorsk. The melodies sound strangely alike when they both read; the vowel sounds are similar. In some of the other poems he has used bokmål (Danish-Norwegian) – performed in dialect. We understand that there are many choices to make in the work of translating. – What type of language are the original poems written in? Do any of the poets write in dialect? Do the other countries have more than one official written language? Now the hobby linguists in us awaken; the heritage after Ivar Aasen, as Gunnar puts it.

– I think that the poem´s relation to the language is very important, he says.

We let this line set the punctuation mark and hope that you, like us, are on your way into the world to find poetry waiting there to be translated.